You have probably considered logging the data from your home security devices and often the most difficult question is, where do I start? I included a list of loggers that can be used to collect security data from home devices. One that I have always found interesting is the gateway ISP router because it collects various types of logs including firewall logs (i.e. iptables).

Some of these loggers require more work to setup (i.e. Linux rsyslog) while other are much simpler (i.e. Windows Syslog Server) and start collecting logs right away from your network. For example, the Syslog Server from Sourceforge is a free Windows syslog server that can setup in minutes and can easily collects the logs from a home based router. It has a few features where you can view the events by host, severity (as per picture) and facility and can send an email when a threshold value has been reached. Here is a screenshot of this software collecting Linksys router iptables logs. 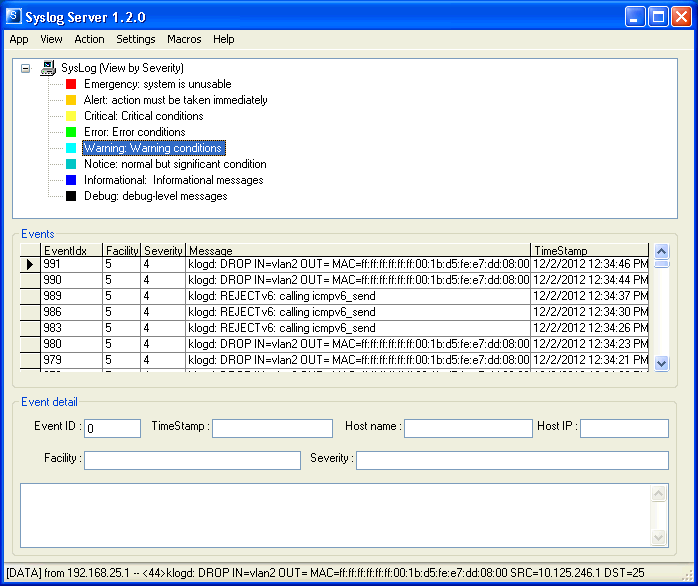 If you are using a logger that works well for you and would like to share your experience with other, either add it as a comment or send your description of your favorite logger via our contact form and I will update the list later.

ArcSight Logger (Log up to 750 MB per day and 10:1 compression. Linux only)
http://www.hpenterprisesecurity.com/products/hp-arcsight-security-intelligence/hp-arcsight-logger/

A new stack-based buffer overflow vulnerability was released on Full Disclosure yesterday for MySQL. Depending of the user privileges, the flaw can cause MySQL to enumerate users, crash or possibly execute arbitrary code with the privileges of the user running MySQL.

The following CVEs have been assigned to track this MySQL vulnerability: