IPv6 Focus Month: The warm and fuzzy side of IPv6

Protocols like IPv6 and IPv4 suffer from two very different types of security issues: Oversights in the specification of the protocol and implementation errors. The first one is probably the more difficult one to fix as it may require changing the protocol itself and it may lead to incompatible implementations. The second one isn't easy to avoid, but at least we do have some decent tools to verify the correct implementation of the protocol. In implementing protocols, developers usually try to stick to the specifications, and implement the "robustness principle" (RFC 1122) which is sometimes also referred to as Postel's law after Jon Postel. In short, the principle stipulates that a protocol implementation should stick close to the specification in sending data, but should be very forgiving in accepting data. This principle makes robust interoperability possible, but also leads to many security issues. For example, in many cases an IDS may not consider data because it is "out of spec" but the host will still accept it because it will try to make things work. Or on the other hand, an IDS may consider a host to be more forgiving then it actually is.

What we need is techniques and tools to check the implementation and push the boundaries of what the specification considers acceptable. This method of security testing is usually referred to as "Fuzzing", and one great tool to implement it for IPv6 is scapy. Scapy used to have an add on, scapy6, that implmeneted IPv6. However, recent versions of scapy include scapy6 as part of the tool.

So what can we do? Lets start with something straight forward: A simple TCP packet. In scapy, we first build an IPv6 header, then attach a TCP header. Here we keep it as simple as possible:

Cool. We send a SYN packet, and got a SYN-ACK back! All normal and as expected. First rule of fuzzing: Start with something simple and normal that you know works.
Next, lets set a neat little extension header: A "Hop-by-Hop" header, indicating that we got a "jumbogram". But, our jumbogram is nasty. Instead of making it big as it is supposed to, we make it of size 0. We start like above, but the we add an hop-by-hop header:
>>> hbh=IPv6ExtHdrHopByHop(nh=59,len=0,options=Jumbo(jumboplen=0));
>>> sr1(ip/hbh/tcp);
Begin emission:
Finished to send 1 packet.
And as expected, we do not get a repsonse. To verify, it helps collecting to keep tcpdump running to collect some packets:
# tcpdump -i en0 -nn -tvv ip6 and host 2001:db8::1
IP6 (hlim 64, next-header Options (0) payload length: 28) 2001:db8::2 > 2001:db8::1: HBH (jumbo: 0) no next header
One thing that scapy "fixed" for us is the payload length, It should be 0 for a jumbogram. No problem... We can tell scapy to set it to 0.

and again no response.

So this was prety simple. Next step: Lets do a 3 way handshake. Instead of pasting the script here, I uploaded a simple IPv6 3-way TCP handshake here. The script will setup a TCP connection to port 80, then transmit a simple HTTP request in two segments. Again: We start simple. This should work.

This one made it past my (delibertly porous) spam filter today. We don't cover these usually, as there are just too many of them (I just got another facebook related one while typing this). But well, from time to time its fun to take a closer look, and they make good slides for awareness talks. 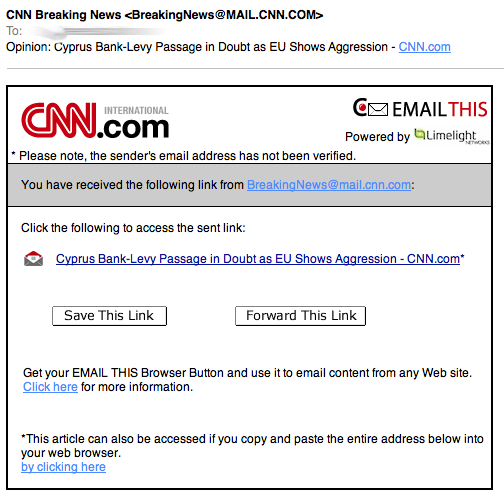 The later page not only uses javascript, but in addition for good measure will also try to run a java applet. Wepawet, as usual has no issues analyzing the file [1]. It discovers the usual browser plugin fingerprinting code, but no specific exploits.

ok. cool... yet more malware. But I didn't want to leave it at that, and went ahead to try and get that site shut down. First stop: whois salexpeoplerelaunch.org . The result is a legit looking contact in Michigan with a phone number, which has been disconnected :( ... so I am trying an e-mail to the listed e-mail address (just sent... no response yet, but will update this diary if I get one)

Moving on to the IP address. It is assigned to https://www.wholesaleinternet.net , a low cost dedicated server / colocation provider. Sending them an abuse request now via email, and again, will update this diary if I hear from them. Interestingly, the IP address is not "known" to serve any other domains based on a quick check of some passive DNS replication systems. I also sent an email to abuse @ szara.net which hosts the domain swiat-feromonow.pl.

Lets see how long the link will stay up.

Microsoft will start pushing Service Pack 1 for Windows 7 as well as Windows Server 2008 R2 as of today [1][2]. As usual, the service pack includes a few enhancements and bug fixes in addition to security patches. If you are up to date on patches, the service pack will only add the additional features.

The service pack has been available since February 2011, but so far only as an optional download. The push to making it an automatic download was likely motivated by the upcoming expiration of the "RTM" (Released to Manufacturing) initial version of Windows 7 in April.