In October, Apple released Security Update 2014-005, specifically with the intend to address the POODLE issue [1]. The description with the update stated:

There are known attacks on the confidentiality of SSL 3.0 when a cipher suite uses a block cipher in CBC mode. An attacker could force the use of SSL 3.0, even when the server would support a better TLS version, by blocking TLS 1.0 and higher connection attempts. This issue was addressed by disabling CBC cipher suites when TLS connection attempts fail.

However, even with the most recent version of Safari, I am still not able to prove this statement as true. Instead, I am able to connect to a test server that ONLY supports SSLv3 and block ciphers. [2] Multiple users of the site confirmed this observation, and the logs also confirm that current versions of Safari will happily ignore Apple's statement above and connect via SSLv3.

Here is a breakdown of a packet capture showing the entire handshake:

As it should, it indicates support for TLS 1.0. My server is now sending back the Server Hello message:

The server offers AES, a block cipher (CBC) which is accepted by Safari.

Other issues we discovered with the poodletest.com website is the use of proxies. Some proxies still support SSLv3, and if they are configured as a trusted proxy terminating SSL connections, then they may downgrade a connection to SSLv3.

How serious is it? The POODLE attack is still a low probability attack. I am not aware of any active use of the attack. So no need to panic. But vendors like Apple aren't helping with incomplete statements. It is possible that Safari is doing some form of downgrading protection. But this is not explained in the very brief advisory.

This attack got it "all", and shows how hard it can be for a non ISC reader to evade some of these tech support scams. The URL used, http://login.microsoftlonine.com is only one letter off from the legit Microsoft Office 365 login page (you noticed the extra letter?).

The content you will get back varies. But here is a screenshot submitted by our reader Daniel: 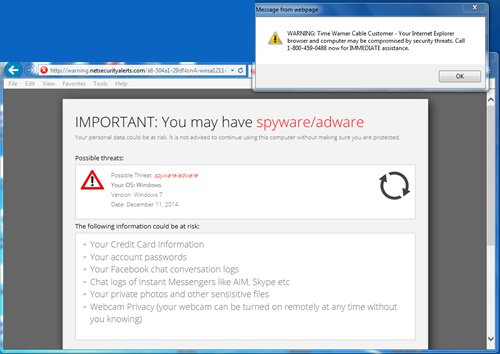 The user was redirected to warning.netsecurityalerts.com (the site appears down right now), and to bolster the site's credibility, it displays the user's correct ISP (we all know this is an easy whois lookup, but a user confronted with this message is much more likely to fall for it then a recent message).

Calling the 800 number now will lead to a sales system trying to sell you a medial alert button if you are 50 years or older.