I had the opportunity to sit with my friend Ron Bowes (@iagox86) awhile back to talk about SEC642 content and the state of web application penetration testing in general. He mentioned hash length extension attacks, and that he had coincidentally written the absolute best tool to exploit them! That's definitely something that we would consider adding. Ron has also done write-ups for capture the flag (CTF) challenges that can be solved using his tool hash_extender.

We have some of the ingredients that we can talk about. We have a topic, we have a tool, and all we need is a vulnerable application. We found a vulnerable application that also included some other interesting cryptographic challenges called CryptOMG by SpiderLabs. They published the solutions to the first and second challenges on their blog. This is the solution to the fifth challenge which is a hash-length-extension attack, and of course we will use hash_extender to exploit it. Installing CryptOMG is covered in Appendix A.

Our first steps are to open a browser, FireFox in this case, and configure it to proxy through Burp. In this case we are using the Samurai WTF VM, a customized version is provided in the SANS SEC642 class.

Opening up the new site in a browser, we see: 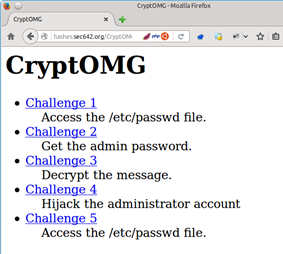 The challenge appears to be a Local File Include (LFI) to see the contents of /etc/passwd. I jumped to that conclusion based on the challenge being to access a file on the server.

Selecting "Challenge 5" gives us the following: 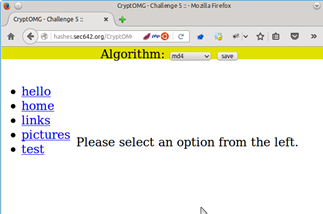 Selecting "SHA1" as the Algorithm, clicking on the ‘test’ link, and then Burp as a proxy shows us the parameters that we presumably have to play with to succeed.

All of the other links are similar. Sending the ‘test’ GET request to Burp Repeater, hit Go, and we see the following response:

We now have a baseline request that gives us a "200 OK" response code, and presumably the contents of the "test" file in the HTML body.

Regardless of the size of the file name input, the output is the same size, which tells us that they may be using a hashing algorithm. As well the output is 40 hex characters in length, or 160 bits. Let’s assume that the hashing algorithm used is SHA1. In this case the application actually tells us that it is, but it is a safe guess based on the fixed length output. The SHA1 hash of the word test is caa44616eed54257deeedb6b3508cefae7d4666d (echo -n test | sha1sum), the SHA1 sum of the word hello is d8ef3b7d2e6a8a6fdb8307dbc09759a5d1558e45 and the SHA1 sum of pictures is f7e22d3af5c9cd78567ed92d425695d33dcfe5d8. These do not match the values that we receive from the server. The application is hashing something else, or is adding something to the hash besides the file name. This leads us to believe that we may be dealing with a Message Authentication Code (MAC). This is where a known value is appended to an unknown secret value and the resultant is hashed. As it turns out this form of creating a MAC is vulnerable to a hash length extension attack.

The algorithms vulnerable to the hash length extension attacks include MD4, MD5, RIPEMD-160, SHA-0, SHA-1, SHA-256, SHA-512, and WHIRLPOOL. They make use of Merkle–Damgård length padding. SHA-3 and keyed-Hash Message Authentication Code (HMAC) are not vulnerable to this attack.

This is how the hash length extension attack works. If the server has created a Message Authentication Code (MAC) based on a vulnerable hashing algorithm then it is possible to create a valid MAC value for an attacker controlled parameter appended to that value. An example would be where an application allows a user to select a file (user controller value) and then download the contents of a song that they had purchased. So the MAC is

where || is concatenation of the two values together. The problem is if the MAC consists of the secret  concatenated with a file name and then hashed, the attacker can append another value and still create a valid hash without knowing the secret. This is possible through the use of padding. What we do is change the input so that

is also a valid MAC value, it is however different from the first one. What matters is that is passes the MAC check implemented on the server. This works best if the attacker can know the length of the secret, or through trial and error identify how long it is based on server responses. The key aspects of this attack are that the attacker is given both the original value and the signature. They are able to know or can guess the secret length and the algorithm. The application will validate the data returned back using the MAC and accept values that pass this check. The attacker appended value will then be processed by the application. This also requires that the appended value be meaningful to the application and useful to the attacker.

If this were HMAC we would need the secret. Brute forcing that might take awhile, so let's try a hash length extension attack instead! Without knowing the secret we can append to the "file" parameter and try a directory traversal with a local file include (LFI) attack. We just need to be able to create a valid hash. So our desired parameters will look something like:

Where they concatenate a secret with something that we can control to generate a hash. The magic of this attack is that, if we exploit that vulnerability, we can append to the filename and still generate a valid hash without knowing the original secret! However we do have to guess the length of the secret, or brute force it. In this case we are going to assume that the secret length lies between 10 and 40 bytes.
Enter hash_extender! Downloading it from git and making it is quick and easy. The instructions are in Appendix B.

First run ./hash_extender with no parameters to see the syntax (shown in Appendix C). The last few lines summarize the required options.
Running the following should give us some file names and hashes to try!

(I had intended to put a crazy one liner in there, but Ron is way cooler and more l33t than me). If we are not successful we see a 404 response code and the HTML does not contain the file that we are looking for: 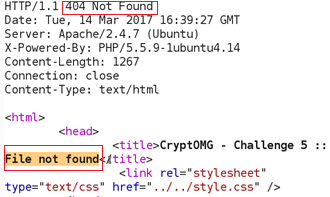 The first time I tried it I had not put enough ../ in and got a 200 response code without the file contents. The 200 response code indicates that we likely passed the MAC check. 9 iterations of ../ seemed like a good number. Running the results from hash_extender through Burp Intruder we get a hit. This was done by putting the signatures in one file, the strings in another, with both used as payloads to Pitchfork on the Burp Intruder tab.

As it turns out the length of the secret was 34 bytes. Let's see what we have!

Success! Without knowing the 34-character secret password we are still able to grab the contents of /etc/passwd through the hash length extension attack. The beauty of this example is that there are actually three separate vulnerabilities that are used together to form the attack. The hash length extension, the local file include, and directory traversal,
This is one of the many practical attack techniques that we teach in the SANS course SEC642.

Appendix B: Installing hash_extender (again using Ubuntu, but in this case the Samurai WTF VM)