Systemd Could Fallback to Google DNS?

It is already known that many systems are using the Google DNS as a fallback configuration. Docker is a good example. As written in the documentation[2]:

Yesterday, there was some interesting tweets passing around about the same kind of behaviour but for systemd[3]. 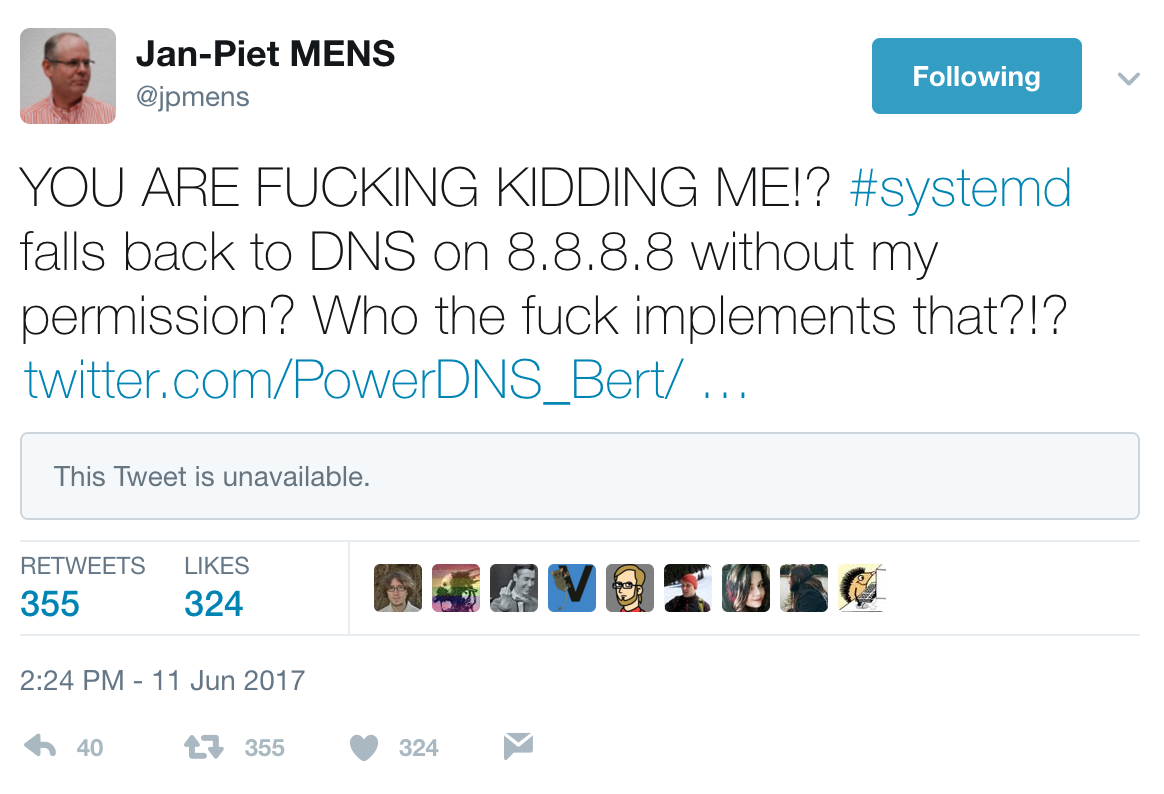 "systemd" is the new system introduced in 2012 to replace the good old “init”. It is used to manage processes started at boot time (in userland space). systemd introduced a lot of new features but also was the reason of major flamewars in the Linux community about pros and cons of the new system.

In the GitHub repository of systemd, in the configure.ac file, we can read the following block of code[4]:

How to interpret this code? systemd has a built-in fallback mechanism that specifies, at compilation time, that if no resolvers are configured, it uses the Google DNS by default! I performed a quick check on different Linux distributions (installed out-of-the-box):

This ‘FallbackDNS’ purpose is defined here[5]

A space-separated list of IPv4 and IPv6 addresses to use as the fallback DNS servers. Any per-link DNS servers obtained from systemd-networkd.service(8)  take precedence over this setting, as do any servers set via DNS= above or /etc/resolv.conf. This setting is hence only used if no other DNS server information is known. If this option is not given, a compiled-in list of DNS servers is used instead.

I also found an old report about this in the Debian bug tracker[6].

But the DNS configuration is not the only one to be affected, a list of default NTP servers is also preconfigured at compilation time[7]:

Ok, nothing really critical here. Based on the tested distributions, there is almost no risk to see systemd falling back to the Google DNS. However, this is a good signal to keep in mind that some developers might introduce dangerous features and/or configurations in their code. Grepping for static IP addresses in configuration files is always a good reflex. About the DNS, my recommendation is to restrict the DNS traffic on your network and run your own resolver.

This is definitely present on Ubuntu 17.04 (zesty zapus); it uses the same location as the other systemd-based distros: /etc/systemd/resolved.conf.

We might want to reconsider if free software is always developed in good faith, or if the developers would compromise in some areas of privacy/security that you wouldn't be happy with for your own use case. We're slowly learning how to defend in-depth against possibly-backdoored hardware like Intel ME and black-box HWRNGs. So we can apply the same principles like sandboxing to software to make it easier to trust.

For this specific example, a blackhole route to 8.8.4.4 etc. would have been sufficient. With iptables you could block all outgoing DNS queries except to a whitelist of destinations. Or, filter outgoing network traffic per-uid using the "-m owner" match, and either LOG or DROP everything else.

I particularly like where OpenBSD is going with pledge(), which is even able to restrict ability of daemons to do things like file I/O. Maybe systemd is such a large beast that something like it couldn't be implemented there, and if that's the case I would suggest to simply steer clear of it.