We observed an increase on UDP connections that use UDP port 5060. This port is typically used for VoIP connections using the SIP protocol. The activity is indicative of attempts to locate weakly-configured IP PBX system, probably to brute-force SIP passwords. Once the attacker has access to the account, they may use it to make or resell unauthorized calls. The attacker may also use the access to conduct a voice phishing (vishing) campaign. 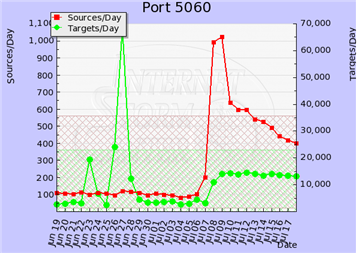 We observed  a similar up-tick a few months ago. At the time, the activity was attributed to SIP brute-forcing that probably originated from systems running in Amazon's EC2 cloud.

As described on the Digium blog, publicly-accessible SIP systems are seeing large numbers of brute-force attacks. Systems with weak SIP credentials will be compromised, similarly to how email  accounts can be compromised by guessing the credentials "The significant difference is that when someone takes over a SIP platform to make outbound calls, there is usually a direct monetary cost, which gets people’s attention very quickly."

One way to review  your SIP exposure is to use the free SIPVicious toolkit. Interestingly, SIPVicious now includes a tool for crashing unauthorized SIPVicious scans.

A few security recommendations for those using the popular Asterisk IP PBX tool:

Thanks to Adam Fathauer and Thomas B. Rücker for sharing the details of some of the malicious acrivities with us! Also, thanks to ISC handler Donals Smith for his insights on this topic.

I confirm you the activity.

The Emerging-Threat Snort signatures 2008578 and 2011716 have always worked well. However, the recent wave of SIP scans is mostly detected with the recent signature 2011766 (matching on sundayddr). It's been on the top of our charts for a while. If you run Snort, you probably want to run these sigs. Update your Emerging-Threats rules if you don't have them already, and enjoy the alerts! :)